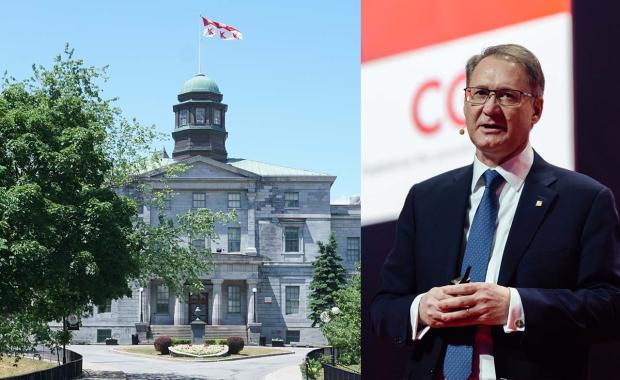 George has served as our President and CEO since October 2016. He joined CGI through the acquisition of American Management Systems, Inc. (AMS) in 2004 and has held numerous leadership positions across operations, including President of CGI Federal from 2006 to 2011 and President of our U.S. business from 2011 to 2015.

He led our global operations as President and Chief Operating Officer from May 2015 through his appointment as CEO. Under his leadership, our professionals around the world partner with clients to lead, innovate and deliver on the transformational power of technology in a digitally connected world.

George was one of four people McGill University honored as “highly talented and engaged individuals who serve as an inspiration for our community of students, professors, researchers and staff.”

“This year’s honorary doctorate recipients are being awarded to exceptional leaders in their respective fields, who also embody McGill’s vision and values, and have made outstanding contributions to the betterment of society,” said Professor Suzanne Fortier, Principal and Vice-Chancellor of McGill University.

Founded in 1821, McGill University is Canada’s top-ranked medical doctoral university and is consistently ranked among the top universities both nationally and internationally. A world-renowned institution with research activities spanning three campuses, McGill attracts students from more than 150 countries—its 12,800 international students making up 31% of the student body.

McGill awards honorary doctorates “in recognition of a lifetime of scholarly, scientific or artistic achievement, or for exceptional contribution to the public good through professional or philanthropic activity.” Members of the university community submit nominations, which are reviewed by a committee that then makes recommendations to the McGill University Senate.

Our 40 years of continuous profitable growth is a testament to the confidence our clients place in us, to the commitment of our members, and to the growth that provides our shareholders with return on their investment.
Learn more

Savoy Magazine names CGI board member Kathy N. Waller as one of the Most Influential Black Corporate Directors

This merger will expand CGI Federal’s footprint into strategic markets, such as the U.S. Air Force and Space Command and add to its digital modernization and DevOps capabilities.

CGI Academia, our modern learning platform, along with our Digital 101 program in Asia-Pacific received 2021 Brandon Hall awards for excellence in technology implementation and upskilling employees, respectively.

The business benefits to joining the Race to Zero

September 6, 2021 Reflecting on the past few months since CGI committed to achieve net zero globally before 2030, I have seen businesses come together to collaborate and take urgent action in the ...

CGI welcomes Frank Witter to its Board of Directors

A caring neighbor for 45 years – Message for our clients

George Schindler and Julie Godin share a message of thanks for clients and an announcement of our #CGIForGood campaign, which shines a bright light on how we benefit our shared ...

CGI announced its selection by Forbes to America's Best Management Consulting Firms 2021 List. Over 5,500 clients, spanning 21 industries across the world, rely on CGI’s comprehensive, scalable and sustainable IT and business ...